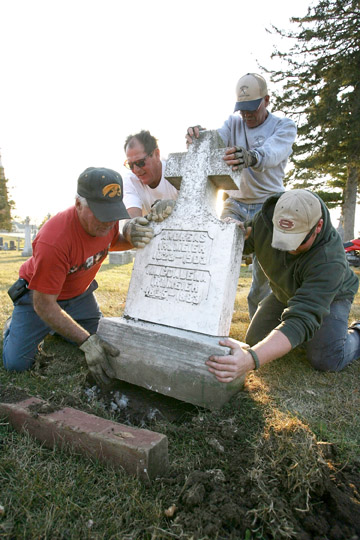 Volunteers are helping ensure the future of Holy Angels Parish and Cemetery by paying respect to its past — a rich history that is the heart of the Roselle community. For the past several months, parish members have been restoring monuments and straightening headstones of graves that date back to the mid- to late 1800s and making improvements to the historic Catholic church.

Project coordinator and volunteer Leo Sibenaller said, “I believe the members of the parish have the same commitment and drive, as well as pride in the church and cemetery as I do. We have to take care of the past to ensure the future, that memories live on and that history continues to be made here.”

It’s been an ongoing process that began with a meeting in January when the Holy Angels Church and Cemetery Foundation made the decision to begin restoration of Father Geling’s monument. The majority of the project relied heavily on volunteers, including Tom Simons, Jerry Rupiper, Joe Rupiper and Sibenaller, doing the labor. Material expenses were picked up by Holy Angels Forever, an initiative set up by Albert Klocke years ago to help cover maintenance costs for the cemetery and church.

The restoration plan quickly spread to include the straightening of 60 to 70 headstones and refurbishing metal grave markers, but not without some surprises. The volunteers came across six old graves that at one time were marked with wood posts. And while the posts were in very good condition below the surface, they had deteriorated significantly above ground to the point there were no indications of who was buried in the graves. With the help of Irlbeck Precision Surfaces and Boyce Monument, new markers were installed in time for Memorial Day. The granite markers are ringed by concrete and lay flush with the ground and simply read “unknown.”

Restored Iron Cross and Crucifix Grave Marker Straightening the headstones was a simple process, although labor-intensive. Many of the stones placed at the turn of the century did not have concrete bases as is the norm today. Over time, those stones tend to settle, shift and move — some alarmingly from their original vertical stance. A skid loader was gently used to lift the bottom of the stone so workers could place a new foundation of crushed rock, forming a level base

Joe Rupiper and Sibenaller identified 24 headstones with concrete crosses that were either heavily damaged — or completely missing. Using wood forms, the two men cast new concrete crosses that were later pinned and epoxied in place. Monuments made of steel were removed, cleaned, repaired and painted before they were returned to the cemetery. Boyce Monument also applied new adhesive to headstones that had worked loose over time.

The cemetery work has been completed for this year, and in 2012 the men want to chemically clean some of the oldest stones to remove the dirt and mold that has accumulated in the past 100 years. The pride in the parish was also evident in the nearby church. This fall a new steel roof was added, and in the near future, the main doors on the west side of Holy Angels will be replaced. Basement windows in the church were also recently replaced.

“They will look identical to what we have now,” said Riesenberg. “We want to stay with that because of the historical value,” added Jerry Rupiper.

Jerry Rupiper said, “We’ve had families come back with their college graduates that intend to get married here in the next year. When their children see the beauty of the church, they’re just in awe. There are people all over the country, who were from here or still have family here. When they come back they can be proud of what we’ve done.”

The parish has had the blessing of the Sioux City Diocese, which Jerry Rupiper said also sends a positive message about the future of the historic church. Holy Angels has Mass at 5 p.m. every Saturday.

The work certainly has been rewarding for Sibenaller, Rupiper and other members of the parish, but it reaches beyond the physical improvements that can be viewed while strolling the church grounds. Jerry Rupiper sees it as a passing of the torch from one generation to the next. “I feel strongly about this community, my great-grandfather, my grandfather, my dad are all buried here. It goes back generations. That’s not my story, that’s everybody’s story here,” Rupiper said. “The younger generation has to take note of what’s going on, they have to buy into this, they have to believe that there is a reason why this was put here as a monument.”

Copyright Daily Times Herald – Carroll, Iowa Volunteers are helping ensure the future of Holy Angels Parish and Cemetery by paying respect to its past – a rich history that is the heart of the Roselle community. 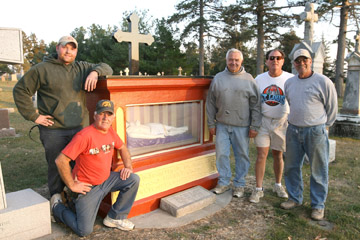 Father Geling's Restored Monument Father John Geling was a priest who served Holy Angels Parish from 1911 to 1925, and before his death, he constructed a chapel monument that would serve as his own headstone. The monument is located near the center of Holy Angels Cemetery, and it was completed in the early to mid-1920s, prior to his departure to LeMars. Following his death, he was transported back to Roselle and laid to rest next to his monument. With the passage of time and because of the outdoor elements, the cement had cracked and pitted and the letters on the front were falling off. Inside, the statue of Jesus, which lays prone and depicts him after his crucifixion, had become weathered. Also, the original paint had started to deteriorate and the color had begun to fade.

After graveside services on Memorial Day, the glass was taken out of the monument and the statue removed to my shop. For the next four to five weeks, the plaster of Paris statue was cleaned, repaired and hand-painted. The entire statue was then clear-coated for sunlight and color retention and protection. Approximately 80 hours were spent in its restoration by myself with the help of my children, Ashley, Austin, Grant and Logan. Once the statue was completed, it was returned to the inside of the church and placed by Mary’s altar until the restoration of the monument was completed.

The outside monument’s cement cross was taken off and the first of many coats of cement were applied to build up and fill in the many pits and cracks in its structure. Once the final coat was on and smoothed out, the colors were added to replicate the existing Holy Angels Parish colors. The red represents the brick, and the “beeswax” color represents the windows of the church. It is our belief that when Father Geling constructed the chapel/monument, he mimicked the church, so we wanted to bring that back out and at the same time make it vibrant. It is the centerpiece of the cemetery because of its rich history and the effort it took Father Geling to construct.

The original top of the monument was constructed of cement and had become soft and very pitted. A one-inch thick piece of granite was installed by Irlbeck Precision Surfaces. Stonecutter Cody Irlbeck also produced a granite cross that was permanently attached to the top.

Seeing the light at the end of the end of the tunnel, the statue of Jesus was reinstalled and a new pane of impact-resistant glass was installed by Carroll Glass. The new top and glass help seal the monument and help protect it from the outside elements

Future generations need to understand the commitment people made in the 1800s to form the community of Roselle and to establish an architecturally magnificent structure as the current church building. Our job is to ensure it makes it to the next generation with the same commitment and passion of faith as our forefathers did.